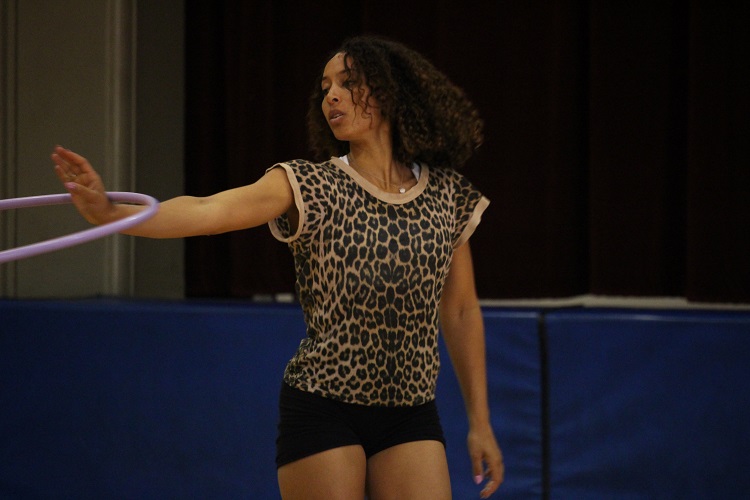 Marawa the Amazing has “hooped” professionally for more than a decade.

Marawa the Amazing holds multiple world records — for hula hooping. The Australian native has traveled six continents to perform at events ranging from bar mitzvahs to product launches. Still, she says only one thing makes her really nervous.

Last year, the 33-year-old rhythmic gymnast and showgirl set a Guinness Book world record, spinning 162 hoops live on the Today Show. She outdid herself a month later, managing to spin 200.

Marawa spent this past week at the Echo Park Recreation Center teaching classes and running workshops for Hoopurbia, an arts festival dedicated to the round plastic dance ring.

Hula hooping is global, but she says LA is its cultural home base.

“It’s kinda like the mecca for hoops, this is where it all comes back to.”

She would know. Marawa has performed in countries most travelers will never get to see.

“In North Korea they used to do a thing called the mass games,” she says. “I got in the last year of it, it was worth the trip.”

Marawa majored in circus arts in college and thinks that this type of performance is more appreciated in Asia and Europe than in the United States. She believes this could be related to a culture of coddling in the U.S.

“Playgrounds are a joke now there’s nothing challenging in there,” Marawa says. “You look at kids in other parts of the world, they’re much tougher.”

The hula hoop has existed in one sort or another since ancient times, but its current incarnation came about when toy company Wham-o introduced the first plastic hoop in 1958.

At Hoopurbia, however, Wham-o is something of a dirty word. Enthusiasts like Marawa don’t think of their hoops as toys but as essential equipment.

“Their hoop is their baby,” she says. “They keep it in a special bag, they make sure that it doesn’t have any scuff marks or anything.”

And it makes sense, Marawa says some specialized hoops such as those equipped with LED lights can cost as much as $600.