Standing in front of her vanity’s mirror, Mirvette Judeh quickly wraps her scarf around her head. She secures it in place by tucking it into her neckline, forgoing the pins which she fears might rip the delicate fabric.

For all of last year, this has been Mirvette’s daily routine.

At age 38, Mirvette decided to wear the headscarf, also known as the hijab, after she noticed an alarming spike in anti-Muslim incidents.

“It started as a thirty-day challenge,” Mirvette said, sitting on the couch in her bedroom in Buena Park, Los Angeles. “I put it on with the mission of being that person that’s going to take away those misconceptions and those false images that have been assigned to my religion.”

“The hijab is bigger than me. It represents an entire religion.”

Recently, Muslims have been more frequently portrayed in a negative light, due to the terrorist attacks in Paris and San Bernardino. In addition, the anti-Muslim rhetoric used by the Republican candidates during the presidential election primaries has led to increased Islamophobia. 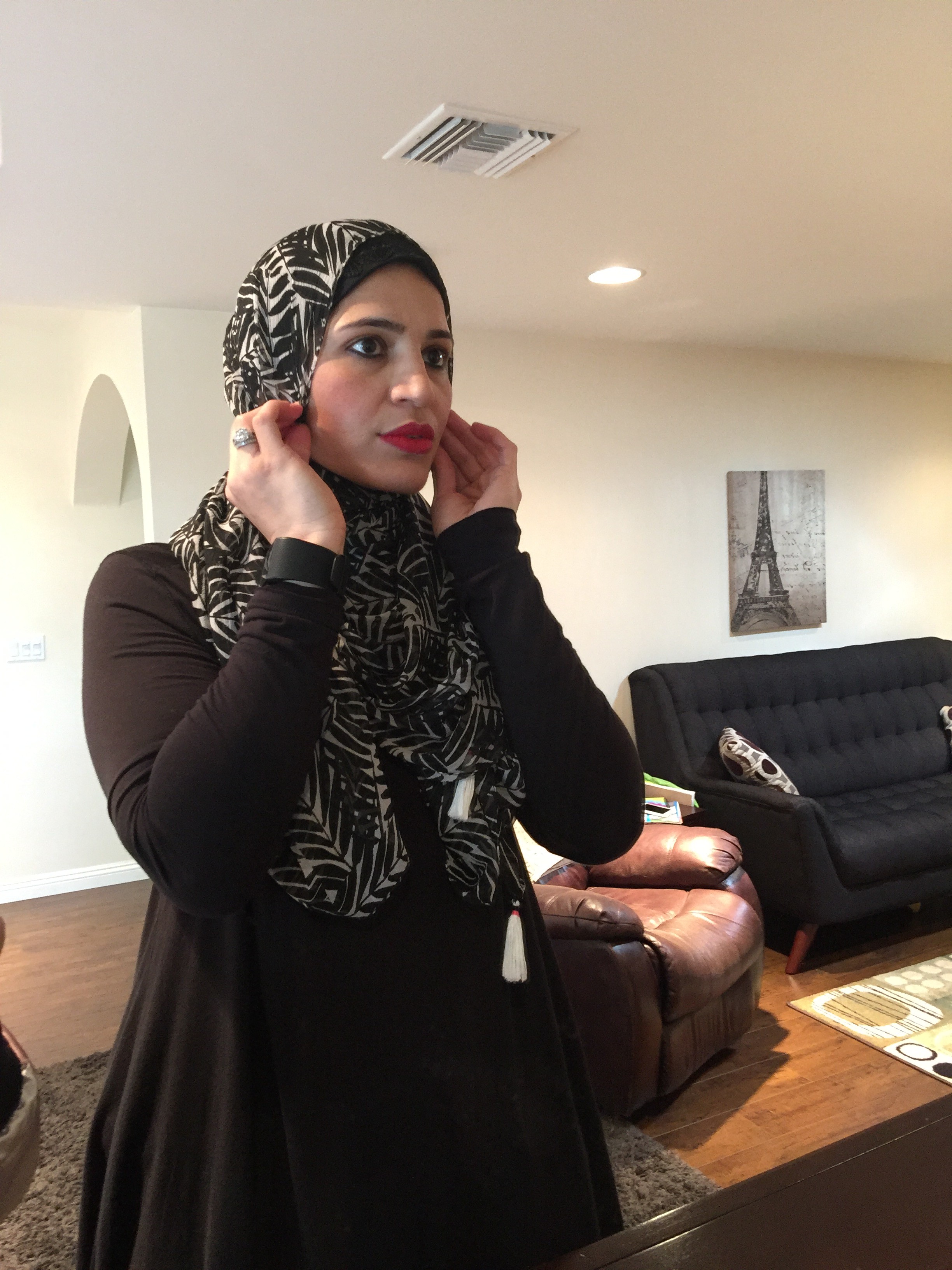 Mirvette Judeh, a Los Angeles resident, puts on her headscarf, also known as a hijab. She started wearing the hijab on April 3, 2015, in solidarity with other Muslim women.

Mirvette, a real estate agent and a delegate for the Democratic Caucus, often tends to be in the public eye. So, she had her doubts before she wore the hijab, and even after she started wearing it.

“It’s been a struggle,” she said, recalling the feeling of being out in public the first time she put on the hijab. “In the beginning, it almost felt like every time I went outside, that I was like going through an obstacle course, or like I was walking on broken glass,” she confessed.

As a Muslim, Mirvette views herself as a representative of Islam.

“I just feel like I have to be perfect because I’m wearing the hijab. Not because Islam dictates me to be perfect, because society will judge my entire religion for something I didn’t do right.”

Mirvette noted the gender disparity when it comes to how others perceive Islam, due to the obvious identifier that is the hijab.

“For us, women, there’s no escaping it. You put it out there, people know you’re Muslim. And who the heck likes to be called a terrorist?”

American raised and Palestinian by heritage, Mirvette has encouraged her three children to appreciate both their Arab and American heritages.

Rakan, 9, Ayah, 7, pray together in their living room while their three-year-old sister, Selma, watches. Mirvette also watches them, helping them recite the Quran verses correctly.

Mirvette has encouraged her children to appreciate both their American and Arab cultures. They pray together five times a day and speak fluent Arabic.

On a recent trip to her local market, other shoppers stared at Mirvette as she walked down the aisles picking up grocery items.

“Look at the stares,” she said. “It almost feels like I’m a foreign object or like an alien or something, like I’m invading the market,” she added, sounding shaken.

“I just feel awkward, you know? Just awkward. Like I’m out of place.”

Despite the negativity with her experience with the hijab, Mirvette is proud of her decision, and continues to stand by it. “I can’t believe I made it a year. I’m going to make it a year!” she said, excitedly. “I’m shocked! And hopefully, it’ll be a lifetime. Hopefully I’ll never take it off.”

Tear Down the Fence: Young People Fight to Reopen a South L.A. Library