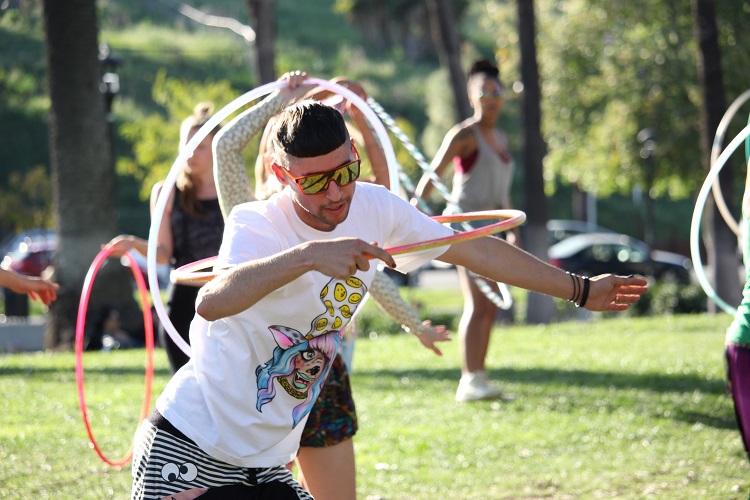 This is not me hooping.

I’ve managed to go my entire adult life without hula hooping. That changed Monday when I went to the Echo Park Recreation Center to find out more about something I had run across in LA Weekly’s event calendar called “Hoopurbia.”

Hoopurbia is an arts festival dedicated to all things hula hoop. The week long event is the creation of Rebecca Halls, a professional hoop dancer from Canada. She started Hoopurbia in 2012 when she lived in Germany and decided to bring it with her when she relocated to Los Angeles this year.

L.A., by the way, is the world center for hooping. (Take that, Portland!)

I walked into the recreation center not knowing what to expect, which seems silly in hindsight. What I found was a basketball court full of people, you guessed it, hula hooping. They weren’t just doing the standard hip hula like I used to do as a kid, these people were dancing.

One guy was jumping around whipping hoops around his arms and neck, another lady was laying on the ground spinning a trio of neon hoops around her outstretched leg. It was the single greatest display of physical coordination I had ever seen in one place outside of Wrestlemania.

I introduced myself to Rebecca who introduced me to Marawa, the woman who would become the focus of my piece for Next Gen Radio. As you hear (or will hear), she’s Australian and has been in the hoop game for more than a decade.

She splits her time between London, where she manages her own dance troupe and Los Angeles, where her boyfriend lives. She’s traveled the world, she’s set world records and she’s been on TV — which means she’s technically a celebrity.

She also doesn’t stand for non-hoopers like yours truly.

It wasn’t five minutes before she had ensnared me with a large purple hoop.

“Just stand there and spin it, let it fall to the ground,” she said.

Thank god, I thought, if it’s one thing I know how to do, it’s stand. I gave the hoop a push and stood there. Sure enough it fell to the ground.

“Okay, do it again, but push it harder this time.”

“Okay,” I said. I can handle this. Once again the hoop fell to the ground. This time though, I kinda wish it hadn’t.

“Now try to rock your body, back and forth.”

I gave the hoop another spin and spastically tried to match my body’s movement to the big plastic ring orbiting me. I failed.

Good thing is this for radio, I thought.

But, I’ve got to admit, I wanted to give it one more try.

I learned later that most of the people at Hoopurbia make their hoops out of flexible water pipe like the kind you buy at Home Depot. I think I might be going down to Home Depot this weekend.

8 things I learned at Next Generation Radio this week

We Need a Hijab Emoji

Next Gen Radio tuned me into the world of public radio