Tear Down the Fence: Young People Fight to Reopen a South L.A. Library

This is Francisco Martinez’s motto, and it’s printed on the back of his T-Shirt.

Martinez, 22, is a full-time college student studying respiratory therapy. But just a few years ago, he was on a different path.

“At one point of my life it was hard for me to just get away from drugs and go hitting the books,” he said. Martinez was in a gang, he was on drugs and had dropped out of high school. “Even though I have family at home, I feel like I was alone,” he said. “If there was a library or a youth center with guidance, I would have done perfect.”

Now Martinez is 10-months sober and is working with the Youth Justice Coalition (YJC), a social justice group, to reopen Hyde Park Library in South Los Angeles as a community center. The library closed permanently in December 2004. 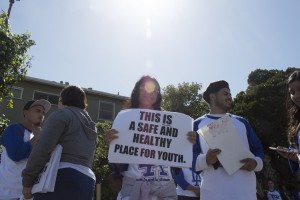 A few dozen young people protested outside the shuttered library Monday and demonstrated what the space could be used for if it were to reopen. They held workshops, played games and ate El Pollo Loco in the parking lot.

This is the group’s second attempt to show the local government what they envision for the abandoned library.

According to the group, a protest in 2011 turned into a four-block police lockdown. Around 40 police officers showed up as the group marched along Crenshaw Boulevard near the library, the group said. Police officers threatened to arrest them for trespassing. Protesters left without any arrests, but an eight-foot-tall fence went up around the library to prevent anyone from trespassing.

On Monday, a handful of police officers showed up and warned protesters not to trespass or vandalize the building hours before the protest started, said Oscar Moreno, a YJC organizer.

“We’ve been here for about four hours and we’ve done nothing but peaceful protest, but yet they feel necessary to be right there,” Moreno said, pointing across street. “That’s our taxpayer money that should be going somewhere else instead of just having them looking over people who are protesting. They get funded but these buildings don’t.”

Organizers with YJC want the city to redirect five percent of its law enforcement budget to youth development — things like opening an after-school community center and creating jobs for young people.

Melina Abdullah, an original founder Black Lives Matter, said the city needs to reconsider its development strategy and figure out an efficient way to improve all neighborhoods in Los Angeles, including South L.A.

“What we have is a lack of will,” Abdullah said. “A lack of vision in our political leadership.”

She believes the city can easily improve the lives of Angelenos of color. “If they wanted to, with a snap of a finger, they could open that library, they could provide a youth center, they could do the things that are necessary to get communities up and running and viable,” she said.

Abdullah said that change can happen, but city officials need a forceful shove in the right direction.

“We need to think about what kind of visions we’re going to push as a community,” Abdullah said. “Because a community has the power to push for something different.”

Martinez is one of those people who will not sit back and wait for the government to respond to their requests. He does not want more people to go down the same path he did.

“I don’t want my sister to grow up and see the violence against police, against the community toward my people, toward black people, toward all kind of people, you know,” said Martinez. “People should stand up and do something about it, instead of just laying back and watching everything that’s going on.”

He said he will not back down and got emotional looking at the fences around the library. 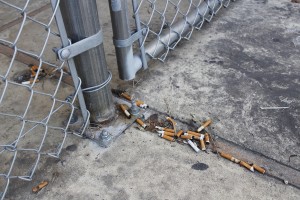 Martinez also said if he had the money, he would buy the property right away. He loves arts and music and imagines a wall of colorful graffiti and a music studio in his community center. And most importantly, classes to help people get away from addiction and go back to school, Martinez said.

He said people in his community have the potential to become the next doctor or the next president, but many people struggle to stay in school because nobody pays attention to them and nobody invests in them.

Martinez hopes the phrase on the back of his shirt will one day become reality. He wants to prove that he is capable of success and that he can improve the lives of the people in his community. 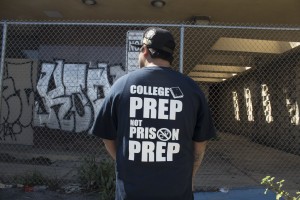